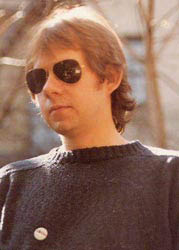 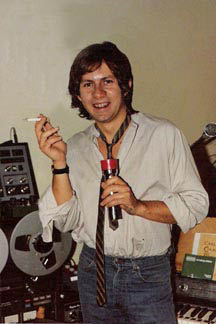 Prior to hooking up with Jess in New York during 1980, Peter Wood had already cemented himself an enviable reputation as one of the top go-to session keyboard players, a reputation forged over many years amongst which were almost as many sessions as there were days on the road.

This was really a set-up manufactured by Island to allow the bros Sutherland to better tread the boards and follow up a couple of minor hits, The Pie as well as Sailing.

That song wasn’t much of a hit for SB&Q but it was one that Rod Stewart turned into sheer publishing platinum for one of the bros Sutherland (Gavin) – it is, incidentally, Rod the Mod’s biggest ever-selling UK single.

Pete also formed (sic) Natural Gas – the band which included Jerry Shirley who would go on to co-found Humble Pie.

He also played on three albums by Jonathan Kelly and one by Billy Lawrie (Lulu’s brother) that featured many of the musicians from Stone The Crows.

However, perhaps his biggest claim to fame was his work with Al Stewart (on Past Present & Future, Modern Times as well as Time Passages).

Plus, of course, he co-wrote Stewart’s endearing classic – Year Of The Cat, a record that pretty much definied bedsitter images for a million students and more around the world.

We're sad to have to remove the exclusive video that was here - which has been hacked and spread around the world -  disregarding all copyrights belonging to Jess Roden and Hidden Masters. 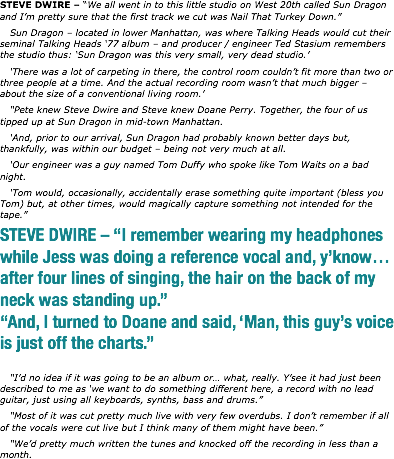 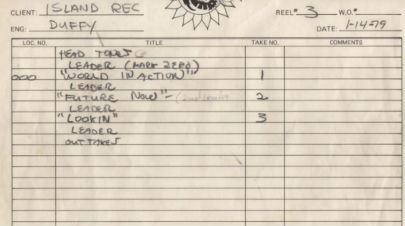 "So now, what do we do? Well, why don’t we punt it around – after all, we’ve nothing to lose. So we approached Antilles (a division of Island Records in New York). And, we presented the band as a ‘garage outfit’ based in New Jersey that Pete Wood and I had discovered and produced.

"Surprisingly, Antilles decided to go for it. In retrospect, I suspect they knew that it was Pete and me and not some undiscovered band from New Jersey.

"Anyway, they gave us a budget to find a studio and do final mixes and, when that was done and the record released, packed us off on a tour of the East Coast radio and television stations.”

As a prelude to the album’s release, two cuts were included in the film They Call It An Accident / Ils Appellent ça Un Accident – a quirky (for wont of a better adjective) Euro-art-movie.

The soundtrack was also released by Island in France, the US and the UK – featuring a number of otherwise unavailable tracks (that are now real rarities) from U2 and Steve Winwood.

The two ‘Rivits’ tracks were simply credited to Jess Roden / Peter Wood, indicating that the album’s soundtrack was compiled prior to the official Rivits’ album release.

The Rivits album was – eventually – released on Island’s subsidiary Antilles label in North America and in the UK on Island itself. However – despite being credited, the entire band didn’t actually make it onto the back of the album jacket.

“Eventually, the photograph that came out has my head airbrushed onto Jess’ body while Doane doesn’t feature at all – his place was taken by a nephew of Chris Blackwell’s.”

“I never really knew what became of the record, until this friend of mine called one night.”

“He said, ‘Steve, there’s this all-hippy’d out bowling alley on University Place and 12th Street that doesn’t even open until midnight and most of the people who go in there to bowl are heroin addicts and alcoholics and punk-rockers and stuff like that but… they have the most amazing music.”

“And, one of the songs that they played like fifteen, twenty times a night was one of the tracks of the album... Future Soon.”

“Plus, I’d hear reports from the field… like from Doane when he was on tour with Jethro Tull.”

“He told me he was in a hotel room in Berlin this one time and he had his radio set to wake him up at a certain hour by playing the whatever-it-was radio station.”

“And, in that twilight of between sleep and awake he thought that he was dreaming about being in the studio cutting that track… Future Soon… until he realised it was actually his radio in this hotel room in Berlin – and, that’s what woke him up.”

And, a couple of years after the adventure of The Rivits, he joined Jethro Tull during 1984 – and, in fact, Doane is now their third longest serving member.

Following The Rivits’ album release the band played a brief series of dates that were prefaced by rehearsal sessions held at Pink Floyd’s facility in Long Island City.

STEVE DWIRE –“Doane had moved on by this time and Gary T. Amos came in to play drums.”

“The rehearsals were hot... I can remember driving back with, I think Pete and Jess, listening to the rehearsal tape and thinking... man, we’re cooking.”

But, given a lack of ‘tour-support’ it wasn’t just Doane who missed the shows, Steve Dwire didn’t travel to the UK either.

That brief series of dates included a sold-out show in London at The Venue – originally the Victoria Picture Palace that had opened in 1911 directly across the street from what is now Victoria Street Tube Station. In 1978 it re-opened as a quasi nightclub-cum-concert auditorium owned by Virgin Records.

Through its brief, three year life, it became the equivalent to (say) The Ritz in New York as as London’s only important ‘club-sized-semi-showcase-styled-venue’ and played host to the likes of Hall & Oates, Aztec Camera, Cabaret Voltaire, Todd Rundgren, Lintoin Kewsi Johnson, Charlie Dore’s Back Pocket, Toots & The Maytals, James Brown, Captain Beefheart, The Skids, Altered Images, the Buzzcocks, Aswad and many more besides.

JR - “Still, never mind. Chris Blackwell had thought it an extremely interesting concept and so, signed Pete and myself (The Rivits) to Island Records - Yeh - cover blown! and, back in the old routine!

‘We tipped up at Compass Point in the Bahamas in January 1980.” 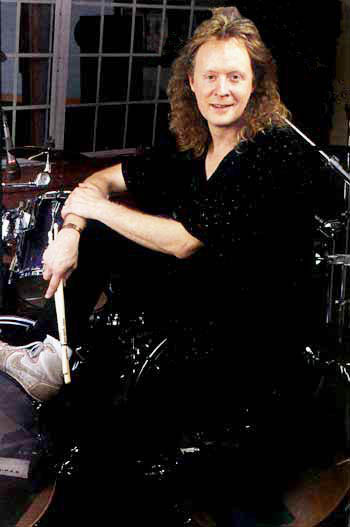 DOANE PERRY  - “I discovered the possibility, however unlikely that might have been, of young girls chasing me down the street if I took up the drums. So it began.“ 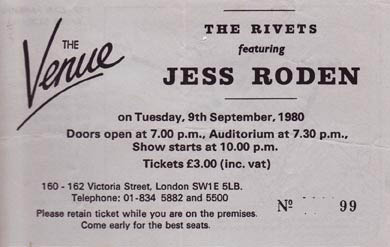 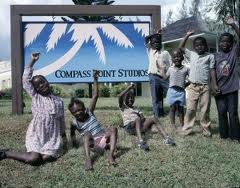 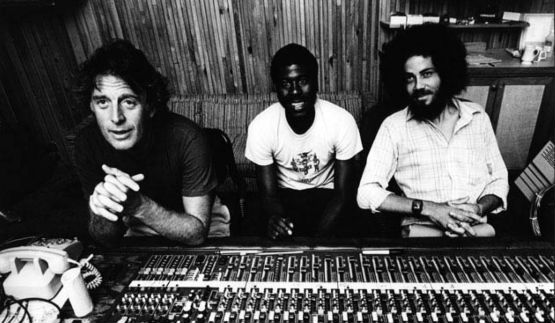 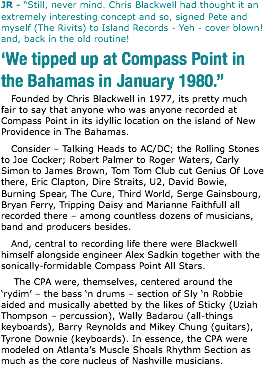 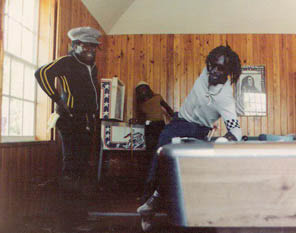 Alex SadkinSadly, however, Compass Point went into decline in the late ‘80’s following the death in a car crash of Alex Sadkin. After his death, no one was resident who possessed any real international business acumen, meaning that fewer artists worked there and what was, at one time, state-of-the-art studio equipment began to suffer from lack of maintenance.

However, another factor was in play too since much of the Caribbean was hit by a hurricane as destructive as if it had been meteorological: cocaine from Colombia and Peru was being transported in large quantities to not only Jamaica but also The Bahamas from where it was shipped to Europe and America.

Nevertheless and over time, recovery occurred and Compass Point is once again thriving – and, although the days of that legendary house band are now long gone, the music lives on.

“Anyhow, at that time, Grace Jones, The Tom Tom Club, Joe Cocker and Sly & Robbie were all recording at Compass Point Studios.

‘So that was when I recorded with Grace on her ‘Nightclubbing ‘ album. Barry Reynolds was there, great great player… Wally Badarou, all that crowd, it was a fun time, very relaxed, but The Rivits did no more really.”

SLY DUNBAR (speaking to writer David Katz) – “Compass Point, you could describe it as oceanic sounds, the sound of the sea coming into the music.”

For anyone so-inclined the retrospective Funky Nassau: The Compass Point Story 1980-1986 is a worthy introduction to those heady times.

“Returning to New York after a sublime ‘family winter ‘ in the Bahamas I realised that I needed to think long and hard about what I should do next...”

Pete moved on too and became part of Pink Floyd’s unseen, surrogate band – often referred to as ‘The Bleeding Hearts Band’ while they performed The Wall concerts – alongside former SB&Q cohort John ‘Willie’ Wilson, Andy Bown - formerly of The Herd, Peter Frampton’s band and nowadays a member of Status Quo – and Snowy White, for a time a member of Thin Lizzy.

He re-joined Roger Water and The Wall Tour, playing on the Live In Berlin doubleCD; Bob Dylan’s (The Bootleg Series 1-3) alongside Mike Bloomfield, Al Kooper, Mick Ronson and Mick Taylor; and also made records with Sophie B. Hawkins, The Roches, The Local Boys (with Andy Fairweather-Low) as well as reuniting with, and playing on, Al Stewart’s 1993 release (Famous Last Words).

Unhappily, in December of that year, Pete died aged just 43.

Back in the grip of an Upper East Side  New York winter and far removed from the waves lapping the edge of New Providence, the seeds of change were, once again, in the wind.

“It was pretty much all over then with Island; I must’ve been in New York maybe another month and we talked to CB and…  the marriage was dissolved.

“At first I didn’t write at all, but after a time I started again – after all, it was what I did, I enjoyed it.”

So... while Island was no more home (from home), all was not entirely lost as, from the quasi-blueprint of that second Rivits record...

... the seed of what became known as Seven Windows had been planted. 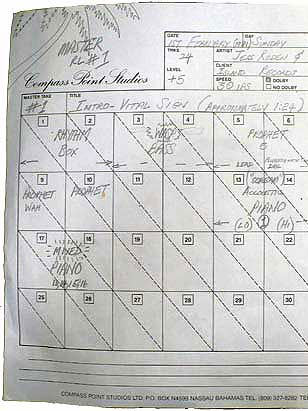 Steve Winwood – Your Silence Is Your Song 4:10

Steve Winwood –Your Silence Is Your Song 5:05

Notes: Contains a number of rarities – U2’s collaboration with Wally Badarou on the title track from their second album as well as Steve Winwood’s theme to the film - unavailable elsewhere other than on the soundtrack variants.

Synopsis: Julie Fabre (Nathalie Delon) is plunged into despair when her son dies on the operating table – but the depth of her loss is nothing compared to how she feels once she finds out that the doctors were responsible for her son’s death, and that one of the doctors was her own husband. He has disappeared, and in spite of harassing his fellow doctors to gain information on his whereabouts, Julie has no luck at all.

Just as she seems to have no means of finding her husband to exact the retribution she desires, she meets Gabriel (Patrick Norbert) – someone still mourning the death of his own brother – and between the two of them, they start to build a legal case against her spouse. As a part of that process, they steal some damaging medical records and when her husband comes to retrieve them, Julie kills him. Now both she and Gabriel, her accomplice, have to run from the police unless they decide to face prosecution -- not a likely scenario. ~ 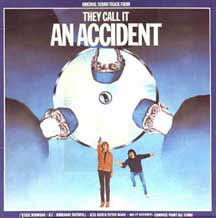 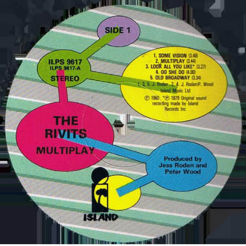 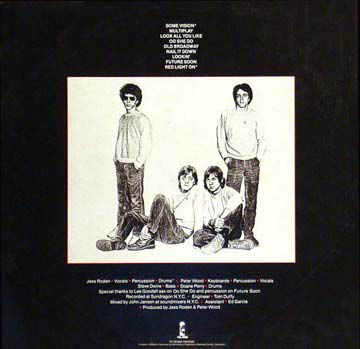 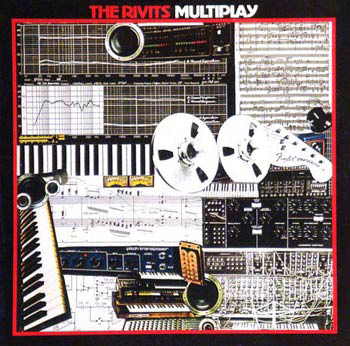